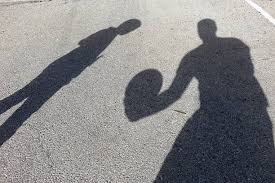 When he was small, we played basketball. The hoop was lowered to 6 feet. I didn’t play defense and purposely didn’t make many shots. When he was a little older, he learned how to shoot, dribble and the rules of the game. As a pre-teen, I would still not block his shots and would let him score when he could, as well as, for him to feel excited about even winning a game now and then. As a young teen he was competitive and really tried to beat Dad. My height and weight advantage still gave me the upper hand, but I didn’t have to “trick” him into thinking I was actually trying. The games were close but still the outcome was predictable. Then he got taller, then he got stronger, then he got quicker and then he got very good. I got older, less stamina and my speed seemed to disappear as quickly as my larger waist appeared. Now at almost 17, he is kind to me…lets me score a few and doesn’t try his hardest. He amazes me with his skill, far more than I ever had, his competitiveness, trash talking, and his ability to turn it off when appropriate. Yes, now he still will play a game with his Dad, not because it is a challenge, not because our skills are equal but because it is still fun to beat Dad, still fun to show me how good he is and still fun to hang out together. It may just be a game, but it mirrors life, as we watch our children go from a blank slate to one that masters skills and learns how to be successful. So, every time I get the opportunity to lose a game to my son, I thank God for the time together and the opportunity to see him succeed.